ROBOTS! They’re coming. Not much we can do about it. So why not have them roll us some joints??

That’s exactly what the folks at Banana Bros. must have been thinking when they invented this awesome weed gadget. It’s the OTTO Smart Grinder & Rolling Machine, the first ever all-in-one smart electric grinder and joint rolling machine.

Touch a button and OTTO senses the consistency of its contents and automatically adjusts to grind your dry herb and roll it into a perfect cone in mere seconds. Just don’t make it angry, that’s when the laser cannon boots up and zaps your neighborhood into a barren wasteland dystopia. (But honestly even if that happens, you’ll be puffin on the perfect robojoint, so it’s totally chill) 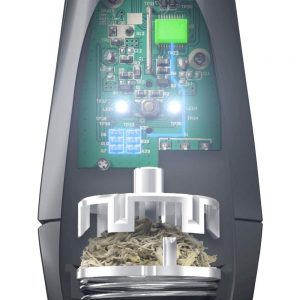 This travel-friendly automatic grinder & joint roller has a USB port for easy charging, and it can grind and pack 20-30 beautiful cones on a single charge. Of course in the future, autonomous electric smart-grinder robots will harvest their energy from the brainstems of human slaves. But for now, USB.

A cool transparent chamber let’s you watch your joints get packed to perfection. It even comes with 20 all-natural premium cones to help get the party started.

Now despite any (well-founded) concerns you might have about OTTO becoming sentient and blood-thirsty, it really is a super awesome weed gadget. Just imagine dropping dry bud in the top and having a perfect joint pop out at the press of a button! Geeky weed dreams DO come true!! Not only that, but…

That's right, oh yes! We scored this awesome promo code to SAVE! YOU! MONEY! on this and tons of other cool stuff at Vapor.com. Click below to reveal the super secret code!

15% OFF @ Vapor.com!
...save on the OTTO and tons of other cool stuff with our Weedgadgets exclusive coupon code!

Check It Out
REVEAL COUPON
some restrictions apply, see vapor.com for details

Use this code for 15% off your purchase at Vapor.com!! Save on tons of cool weed gadgets and smoking stuff, like the OTTO Smart Grinder, the Hydrology 9 Water Filtered Vaporizer, and more!